Most people who follow baseball -- even casually -- know that the New York Yankees have won more World Series than any other team. But, how many know the team in second place? 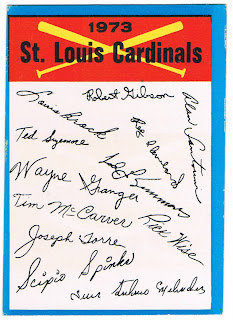 (No Number) St. Louis Cardinals Checklist Card
The St. Louis Cardinals have won ten World Series Titles, several of which came at the expense of the Bronx Bombers. Tonight, they begin taking another shot at adding to that total when they face off against the Texas Rangers.

Let's take a look at the twelve players picked to appear on this checklist card. Six of the signatures belong to pitchers -- Gibson, Cleveland, Santorini, Granger, Wise and Spinks -- and two are catchers (Simmons and McCarver). That leaves just four more players: two infielders (Torre at third and Sizemore at second) and two outfielders (Brock and Melendez). This may be the most lopsided lineup yet featured on this blog.

This is the fifth blue-bordered checklist card featured here, and the fourth that didn't show a full field-ready team on the front.
Posted by Chris Stufflestreet at 8:30 AM