It's well-known that this guy is one of the more notable Hawaiian natives to play major league baseball, but it's not so well-known that he's the first American player whose ancestry was Japanese. He's also the only player of any nationality who ever pinch-hit for Hank Aaron: 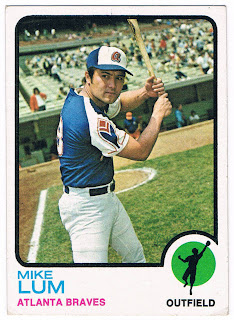 Card #266 -- Mike Lum, Atlanta Braves
Mike Lum was born shortly after the end of World War II, by a mother who was Japanese and a father who was a serviceman. He ended up being adopted by a different family and becoming a star in both baseball and football as a high school player in Honolulu.

Lum played for the Braves on two different occasions. He came up with the team in 1967 and stayed with them through 1975. He rejoined thme in '79 as a free agent. He split those two tours of duty with the Reds and then finished up his major league career with the Cubs in 1981. The next year, he spent a season in Japan, the homeland of his ancestors.

After his retirement, he became a hitting instructor and a coach. He still holds the record for most lifetime homers for a player born in Hawaii, though Shane Victorino appears to be poised to break the mark next season.
Posted by Chris Stufflestreet at 9:00 AM