The Vet in the Background

It may not have been much of a venue compared to what Citizens Bank Park offers today, but the colorful seats in Veterans Stadium and high-rising Upper Deck area make for an interesting background on this card: 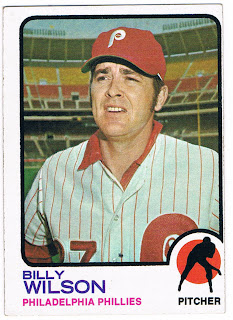 Card #619 -- Billy Wilson, Philadelphia Phillies
Veterans Stadium was still relatively new when this photo was taken. The Phillies moved in during the 1971 season and it watched the team build into a dominant National League force by the end of the decade, win a World Series in 1980 and host two more in 1983 and 1993. It was built to accomodate both baseball and football teams (a novel concept when it was built, but one that was seen as antiquated just a generation later), and also housed several professional soccer clubs and a USFL franchise.

I'm talking about the stadium in the background because there more to be read about it than there is about Billy Wilson. He was exclusively a reliever who pitched in 179 games from 1969-'73 and ended up with a 9-15 record. His minor league stats were much better, and that's what Wilson's Baseball-Reference Bullpen page focuses on. His Wikipedia page, on the other hand, has little more than the fact he was in major league baseball for a few years.

This would be Wilson's final Topps card. He passed away in 1993.
Posted by Chris Stufflestreet at 9:00 AM