In 1973, this pitcher did something that has never been equaled before or since: 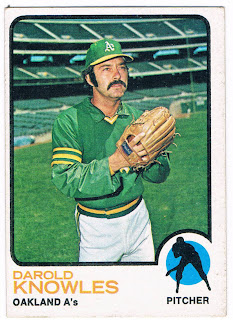 Card #274 -- Darold Knowles, Oakland A's
During the World Series, the A's and Mets went the distance, playing seven games. Darold Knowles took the mound in every one of those games, not allowing any earned runs and saving games 1 and 7. While a total of 6.1 innings over those seven games doesn't seem like much, it's still amazing to note that even with today's specialized pitchers that it hasn't happened again.

Knowles did a lot of traveling, playing with eight different clubs in his 16-year career. He was mainly a starting pitcher during his minor league years, but filled in wherever he was needed in his short stint with the Orioles in 1965. Going to Philadelphia the following year, he began building his reputation as a workhorse, appearing in 69 games and continued that role with the Senators from 1967-'71. He missed part of the 1968 and '69 seasons when his reserve unit was activated.

In 1971, Knowles was traded to Oakland and would be part of a team that went to the postseason every year he was there, including three straight World Series. The A's bullpen also had Rollie Fingers and Bob Locker, so his number of appearances took a hit. Despite appearing in all of the games in the '73 Series, they were his only World Series appearances with them; he missed the '72 postseason after sustaining a broken thumb and was sidelined in '74 after a poor season.

He was traded to the Cubs in 1975 and played with four different clubs in his final six seasons. The end of the line came in 1980, when he retired as a Cardinal and accepted an offer to coach in their minor league system. He still coaches today, as the pitching coach for the Dunedin Blue Jays in Florida.

Darold Knowles still holds a major league record: he picked off a base runner every 24 innings during his career.
Posted by Chris Stufflestreet at 8:30 AM