It's been a really long time since I last visited this subset: 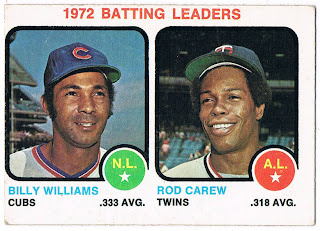 Card #61 -- 1972 Batting Leaders
While the card shows two Hall of Fame players, they were actually the only Cooperstown-bound players who finished in the top 5 in either league among the leaders in batting average. Carew finished six points ahead of the Royals' Lou Piniella, while Williams outpaced the Braves' Ralph Garr by eight points.

For Carew, it was his second batting title after leading the American League in 1969. That said, he was just getting started, winning another five crowns between 1973 and '78. He would continue to consistently hit over .300 until 1983, when he was late into his thirties.

For Billy Williams, however, it was the only time he'd lead his league in the statistic. It was a great year for him, as he also led the senior circuit in slugging percentage, total bases and OPS (which wasn't recognized as a stat then).
Posted by Chris Stufflestreet at 8:30 AM