Despite all the feats and awards this player would accumulate during a seventeen-year career in the major leagues, his personal issues overshadowed them: 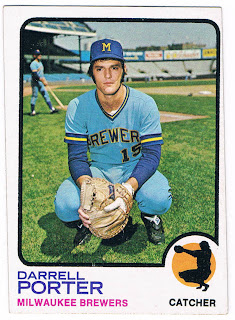 Card #582 -- Darrell Porter, Milwaukee Brewers
In 1980, former player Don Newcombe visited the Kansas City Royals' clubhouse and posed ten questions to the team. A "yes" answer to three of the questions might indicate that the player was having issues with drug abuse; Darrell Porter answered yes to all ten. He soon checked into a rehab facility, becoming one of the first players in any sport to publicly affirm the problem. He became a born-again Christian and was active in outreach programs to help other players get a grip on their own problems, but he never was able to control the demons that plagued his own life. He died in 2002 and the coroner's report said he had ingested enough cocaine through recreational use to stop his heart.

However, the end of the story shouldn't lessen what he achieved in his baseball career. Porter first came up to the majors with the Brewers while still a teenager and was third in the voting for the 1973 Rookie of the Year award. An All-Star nod came in 1974 but his best years came after being traded to the Kansas City Royals in 1976. He caught Jim Colborn's no-hitter in 1977 and became one of six catchers in history to score 100 runs while driving in 100. The other five are all in the Hall of Fame.

After his personal issues surfaced, Porter's numbers declined, but he still had highlights: three World Series with one that brought him a ring and an MVP award, another no-hitter caught in 1983 (Bob Forsch's). He was also one of few players who wore glasses on-field; many of his contemporaries chose to use contacts instead. He would switch teams twice via free agency, going to the Cardinals before 1981 and to the Rangers after 1985. However, the best thing to sum up his career might have been the statement his former teammate George Brett made:

"He played every game like it was the seventh game of the World Series."

Coming from a noted competitor like Brett, that was no faint praise.

The card shown here is Porter's first solo card. In 1972, he was included on a multi-player rookie card but his picture was switched with Jerry Bell's.
Posted by Chris Stufflestreet at 8:30 AM