Although he moved around a lot in the middle of the decade, this guy was part of four division-winning teams in six seasons: 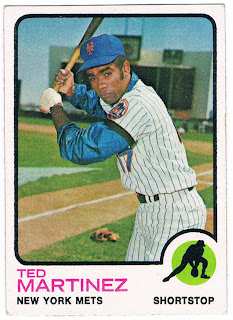 Card #161 -- Ted Martinez, New York Mets
And that doesn't count the fact that he wasn't even in the majors during one of those two seasons he wasn't on a team that made the postseason.

The fact that he's wearing a windbreaker under his jersey indicates this is a Spring Training photo, as does what appears to be a hotel in the background. The Mets trained in St. Petersburg, Florida in 1972 and that appears to be a home uniform. Perhaps a reader who remembered the old Al Lang Field will verify that.

Ted Martinez had a major league career that spanned the 1970s. His first season was 1970 when he first came up with the Mets and he finished in Los Angeles in 1979. In between, he split the '75 season between the Cardinals and A's and was in the Reds' minor league system in 1976. However, he was on the following division-winning teams:

Had he made the majors during 1976, he'd have been with the Reds, who won the World Series that year.
Posted by Chris Stufflestreet at 8:30 AM