Tomorrow is Thanksgiving in the United States and today is one of the busier travel days of the year. As a result, I'll make this a short entry: 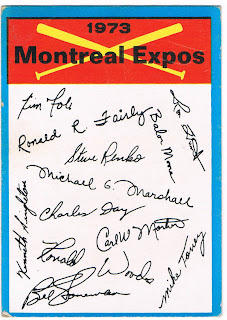 (No Number) -- Montreal Expos Checklist
At the time this card was printed, the Expos were still a relatively new expansion team, and 1973 was its fifth season in existence. The team name was chosen both as a nod to the 1967 Expo held in the city and the fact that it was the same in both French and English.

Once again, the twelve names on the front of the card do not give a complete lineup. Fairly is at first, Hunt at second and Foli lines up at short, but a third baseman is missing. The outfield consists of Day, Singleton and Woods. The pitching staff consists of Renko, Moore, Marshall, Morton, Torrez and Stoneman. No catcher is listed.

So far, this blog has featured six of the unnumbered blue-bordered checklist cards. Only one team has had a full lineup presented in its signatures.
Posted by Chris Stufflestreet at 8:30 AM