They say that no matter how good you are at something, there will always be somebody better who will eventually come along. When this guy was a high school student in Cincinnati, he was seen as a better player than classmate Pete Rose: 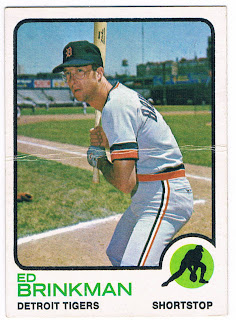 Card #5 - Ed Brinkman, Detroit Tigers
To be fair, Rose wasn't a natural athlete and had to earn his right to be a great ballplayer; he came by the nickname "Charlie Hustle" honestly. As a result, Western Hills coach "Pappy" Nohr said that Rose was "a good ballplayer, but not a Brinkman." Scouts focused on Ed Brinkman's high average and the 15 games he won on the mound in his senior year. He signed with the Washington Senators after graduating and made the team in 1961. By 1963, he was a regular at shortstop.

After the 1970 season, Brinkman was traded to the Tigers in the Denny McLain deal and took up a right side of the infield (along with Aurelio Rodriguez) that was considered to be virtually unhittable. In the Tigers' division-winning year of '72, Brinkman was named "Tiger of the Year," and his fielding prowess won him a Gold Glove in 1973. His glove was exceptional enough to help people overlook a .224 lifetime batting average.

1974 would be his final season in Detroit, and he split '75 among three major league teams: St. Louis, Texas and the Yankees, where he rejoined former manager Billy Martin. After retiring, Brinkman became a coach in the minors and then an infield coach for the White Sox during the 1980s. He remained with the team in various capacities until retiring in 2000.

Sadly, Ed Brinkman passed away from lung cancer in 2008.

This card was featured last week in the excellent Number 5 Type Collection, but that didn't  play into my decision to feature it here now. But I'll put the link here because it's a great card-related blog.
Posted by Chris Stufflestreet at 8:49 AM