Appropriately, the picture on this card shows Greg Luzinski taking a big swing: 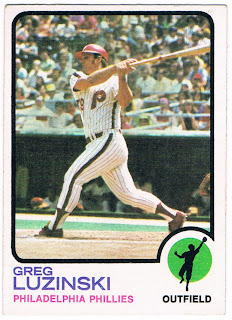 Card #189 -- Greg Luzinski, Philadelphia Phillies
Luzinski would never be mistaken for a top-notch fielder. He was literally placed in left field to limit his defensive liability to the Phillies. Instead, he was placed in the lineup because of the fact that he always represented a brutal power threat. When the Phillies advanced to the NLCS every year from 1976-'78, he smacked a home run in every one of those series.

When the Phillies finally reached the World Series in 1980, Luzinski's season was the worst of his career. However, he still connected for the only home run of the NLCS to help get them to the Series. After that season, his contract was sold to the Chicago White Sox. Not only did that allow him to return to the city where he grew up, but the switch to the American League allowed him to move into a DH role and added four years to the end of his career. Though age had limited his physical abilities, he still showed his brute power: in '83, three of his home runs cleared the roof at Comiskey Park and he hit grand slams in back-to-back games in '84.

After retiring, Luzinski was a coach at several levels from high school to the majors. Today, he runs a barbecue inside Citizens' Bank Park in Philadelphia.
Posted by Chris Stufflestreet at 8:30 AM