Thanks to Bill "Spaceman" Lee's book The Wrong Stuff, I learned more about this guy that I really ever wanted to know. But I'll let you read the book, because I'm not going to rehash it: 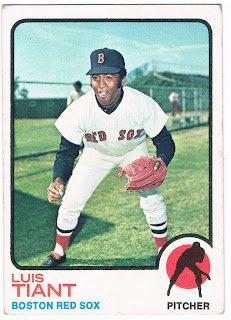 Card #270 -- Luis Tiant, Boston Red Sox
Luis Tiant's father was a tremendous baseball player in Cuba and the Negro Leagues, and he followed in those big shoes from an early age. Starting in the Mexican League, he came up with the Indians in 1964 and quickly became a very respected pitcher, striking out almost a man every inning. In 1968, he went 21-9 with 264 strikeouts and an amazing 1.60 ERA. Had it not been for Denny McLain winning 31 games, he may have gotten more attention for his numbers.

That said, the teams pay attention to numbers, so when Tiant dropped to 9-20 in 1969 he was traded to Minnesota. He spent one season with the Twins and was released by the team in the Spring of '71. He would split that season between the Braves' minor league team in Richmond, the Red Sox' AAA affiliate in Indianapolis and with the Red Sox. Once he was able to stay with the Bosox, he responded by winning 15 games and notching a 1.91 ERA to lead the league. He would earn double-digit win totals for the rest of the 1970s and win 20 three times. He became one of the Sox' most valuable pitchers and helped them to a pennant in 1975.

After the Red Sox' collapse in 1978, Tiant was traded to the New York Yankees. He pitched well in 1979 but showed his age the next year. He pitched for the Pirates in '81 and went back to the Angels in '82.

Even though he's been retired for nearly 30 years, Tiant still holds the all-time record for wins among Cuban-born players and ranks third among all Latin Americans behind Dennis Martinez and Juan Marichal.
Posted by Chris Stufflestreet at 8:30 AM