Right about the time this card was printed, this pitcher's fortune suddenly changed: 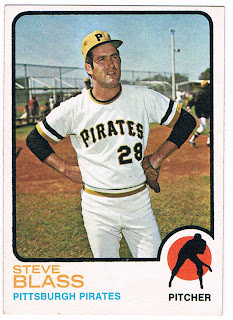 In 1973, he suddenly lost his control. He would end up with a 3-9 record and his ERA ballooned to 9.85. Blass was sent down to the minors in 1974 and was out of the game in '75. Nobody has any explanation for what happened to him, but the term "Steve Blass disease" is still used whenever a promising pitcher's stuff suddenly and inexplicably drops off. Recent "diagnoses" include Dontrelle Willis and Rick Ankiel.

Blass joined the Pirates' broadcast crew in 1983 and is still providing color commetary on the radio.
Posted by Chris Stufflestreet at 8:30 AM