In this shot taken at spring training, here's a player who didn't get to play in the majors at all in 1973: 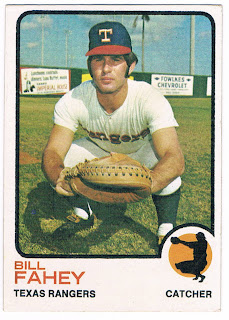 He looks like he's a little annoyed to stop what he's doing to pose for the photographer.

An advertisement from Fowlkes Chevrolet appears on the wall in the background. A Google search tells me that the dealership was located in Pompano Beach, Florida. And Pompano Beach is where the Senators and then the Rangers trained every spring from 1961 through '86.

Bill Fahey played the entire '73 season at Spokane before coming up to the parent team in 1974. He was a weak hitter who spent his entire major league career as a backup catcher. He was the understudy for Jim Sundberg in Texas, Gene Tenace for the Padres and Lance Parrish in Detroit. His career was a lot longer than many would have expected, with eleven campaigns in all.

After retiring in 1983, he managed in the Tigers' minor league system in 1984 before following Roger Craig to San Francisco the following year. He would remain on the Giants as a coach until 1991.
Posted by Chris Stufflestreet at 9:00 AM