It's a Major League Record Regardless...

This player has the lowest non-zero batting average in major league history: 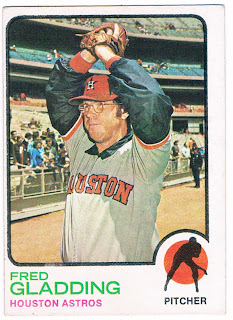 As a relief pitcher, Fred Gladding wasn't always able to take a lot of walks to the plate, but his career avearge was .016 (1 for 63). He did get one distinction that was more positive, though: 1969 was the first year saves were counted as an official stat, and he led the National League that season with 29.

Gladding first made the majors in 1961, when he joined the Detroit Tigers. Through 1964, he was frequently on the bus between the Tigers and their top minor league club. He stayed in the Tigers' organization until after the 1967 season, where he was sent to Houston as the "player to be named later" as part of the trade for Eddie Mathews.

At the time this card was printed, Gladding was nearing the end of his career. In June of '73, he was sent to the Astros' AAA affiliate in Denver, where he would remain for the rest of the year. He was released after the season.
Posted by Chris Stufflestreet at 8:30 AM