The team pictured here was the second-place team in the American League East, much like they've been for many years recently: 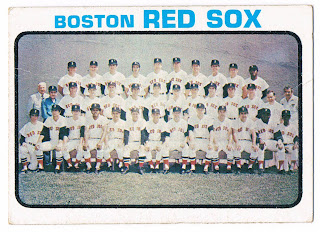 Card #596 -- Boston Red Sox Team Card
First place didn't go the Yankees, however, the Tigers took the division in '72. In '73 the Orioles took the division (as they had every other year since divisional play began) and the Bosox were once again slotted second. That was the end of the line for skipper Eddie Kasko after four years. Despite back-to-back second-place showings and a winning record every season, the Red Sox brass had little use for a manager who couldn't get the team back to the World Series like predecessor Dick Williams. Darrell Johnson took over (and he guided the team to another pennant in '75).

The fabled Yankee-Red Sox rivalry was given a resurgence in 1972. Though it had its moments over the years (the Babe Ruth trade, the Williams/DiMaggio years), the two teams weren't usually both competitive at the same time in recent years. In 1972, the two teams were part of a tight four-team stretch run that inflamed the passions of both players and fans. At the same time, the Munson vs. Fisk dynamic began, Bill Lee was beginning to seem to enjoy beating up on the pinstripers and another trade (Sparky Lyle for Danny Cater) just added fuel to the fire.

The rivalry would need some time to build, however. It would take several more years, a late-season collapse and a well-placed Mike Torrez pitch that Buck Dent sent over the Green Monster to really get the rivalry heated up.
Posted by Chris Stufflestreet at 8:30 AM