Here's another Spring Training shot, with a glove just laying on the ground in the back. Otherwise, he's doing his best to look like the silhouette that appears below him: 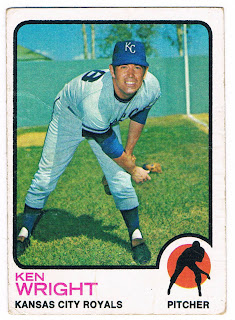 Card #578 -- Ken Wright, Kansas City Royals
This would be Ken Wright's third and final appearance on a Topps card. He had joined the Royals in 1970 and served as both a spot starter and set-up reliever. In 1971 and '72, he split his time between the Royals and their AAA affiliate in Omaha.

In 1973, he would end up with his only winning record in the majors (6-5) but was traded with Lou Piniella to the Yankees after the season for Lindy McDaniel. Piniella stayed with the Yankees but Wright would not. He pitched in three games for the club in April and was traded again. This time, he went to Philadelphia but pitched in their minor league system. He never made the majors again.
Posted by Chris Stufflestreet at 8:30 AM