This player was a rookie in 1972 but still managed to start for the Texas Rangers' very first game: 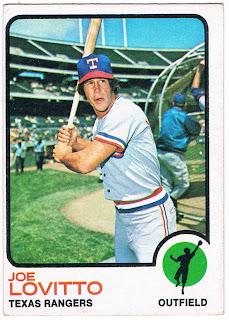 Card #276 -- Joe Lovitto, Texas Rangers
However, Joe Lovitto struggled in 1973 and went back to the minors after getting a leg injury. He was able to make it back to the parent club in '74, but another injury-shortened season in '75 ended his time in Texas. He was traded to the Mets for '76 but was released in Spring Training.

In this picture, Lovitto poses beside a batting cage before a game (which I'm guessing is in Oakland, anybody who knows for sure can chime in with a comment). There is a coach giving instruction in the batting cage, and even two umpires discussing something as they walk out to the field.

Lovitto was renowned for his speed, which made him terrific in the outfield. However, the injuries hampered his abilities and led his career to be cut short. Sadly, cancer cut his life short. He was only 50 when he passed away in 2001.
Posted by Chris Stufflestreet at 8:30 AM