Here's another one of the many "Who is that?!" pictures that appeared in the 1973 Topps baseball card set: 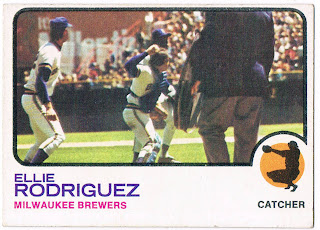 Card #45 -- Ellie Rodriguez, Milwaukee Brewers
The picture shows the catcher getting ready to throw to second. It's not clear whether this is a steal attempt...the other Brewers player behind him indicates a pitcher (the visible "2" on his jersey indicates he's either Skip Lockwood or Bill Parsons) is backing him up at the plate, but the batter is still holding a bat in his hand. Since the umpire's backside takes up a full third of the card, he covers up any clues.

There's one thing for certain. The catcher shown isn't Rodriguez, it appears to be Paul Ratliff. If that's correct, it would be the only card Ratliff would have in the set, since he never had a Topps card since 1971 and played his final major league games the next year. But he's not the guy who we're discussing.

Ellie Rodriguez was one of few Puerto Rican-born catchers of his era. He played for five different teams between 1968 and '76, with the Brewers being his longest stay. He came up as a Yankee, was an original member of the Royals and later caught Nolan Ryan's fourth no-hitter with the Angels. His final season was spent with the Dodgers in 1976.

Ellie Rodriguez went into scouting after his retirement and still performs that task today.
Posted by Chris Stufflestreet at 8:30 AM