Only one set of brothers has ever thrown no-hitters in major league history. And they weren't named Niekro, Perry or Reuschel. One of those brothers is this guy: 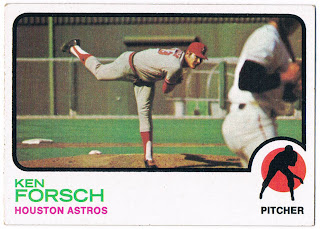 Card #589 -- Ken Forsch, Houston Astros
Ken Forsch tossed his non-no in 1979, and brother Bob hurled two gems while a member of the St. Louis Cardinals. Bob, however, hadn't made the majors in 1973 and was still two years from having his first baseball card.

For a horizontally-oriented image, this shot is well-positioned, with teh catcher and umpire cropped out. Instead, the photo shows only Forsch and the Giant he's facing. At this moment of the game, those are the only two players that matter.

Forsch pitched with the Astros between 1970 and 1980. He started in the rotation but was moved to the bullpen in 1974. He eventually returned to his spot as a starter in 1979, and thanked his team by tossing that no-hitter early in the season. It was his first start of '79 and the team's second game. He was traded to the California Angels for Dickie Thon in 1981 and remained there until 1984. After not pitching at all in '85, he returned the following year but was released seven weeks into the season. He signed with the Mariners but wasn't able to rise above their AAA ballclub.

Forsch became an executive after his retirement. He has been the assistant GM for the Angels since 1998.
Posted by Chris Stufflestreet at 8:30 AM