At the time this card came out, this player was in the middle of a three-year stint in Montreal: 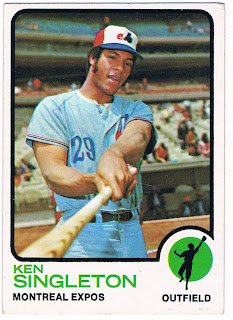 Card #232 -- Ken Singleton, Montreal Expos
Born in New York and a graduate of Hofstra University, Ken Singleton was drafted by the New York Mets and played with them from 1970 to '71. However, he would become a thorn in the side of the other New York team beginning in 1975 when he spent a decade with the Baltimore Orioles.

Singleton played his best baseball during his stint in Baltimore. He always got good OBP numbers, hit around the .300 level frequently and was often one of the top players in plate appearances. He hit 35 home runs as a switch hitter in 1979; at that time, only Mickey Mantle had reached that level in the American League. He was a key part of pennant-winning teams in 1979 and '83, winning the World Series in 1983.

Singleton began a transition from the outfield to DH in 1981, but continued to be a threat with the bat even as age took its toll on his glove. That season, he ran a streak of 10 consecutive hits, a record.

After his retirement in 1984, Singleton returned to the Expos as a broadcaster. He eventually went back to his native New York to handle color commentary and occasional play-by-play for the Yankees.
Posted by Chris Stufflestreet at 8:30 AM