Not the Presidential Candidate

One of the things I like about baseball and football cards from the early 1970s is the way many of them explain what players do in the offseason to support their families while the paychecks stop until the next season. Insurance agent, car salesman, schoolteacher...it was a glimpse into how many had to lead "blue collar" lives before the salaries climbed. This guy, however, was an engineer for GE's research and development for nuclear fuel elements: 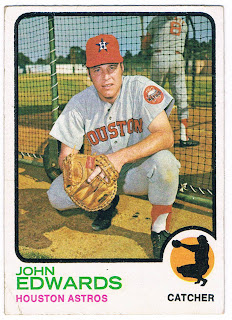 Card #519 -- John Edwards, Houston Astros
Too bad the card here doesn't mention that. Instead, it talks about his fielding percentage the past few seasons. Frankly, the "nuclear scientist" thing would have been much more interesting. Apparently, it didn't pay well enough to lure him away from the diamond, but it's nice to have something to fall back on.

The picture is evidently a Spring Training shot, with Jack Hiatt taking his turn inside the batting cage.

Johnny Edwards (which is what his early cards called him) was a star catcher in Cincinnati. He was a rookie during the team's surprise 1961 season, where they propelled into the World Series. He was an All-Star player for three straight years (1963-65). He caught Jim Maloney's no-hitter, as well as another game where Maloney pitched 10 no-hit innings but the Reds lost due to a lack of run support. However, when Johnny Bench was drafted, there wasn't room for any other catchers named Johnny there. He was traded to the Cardinals before the '68 season.

In St. Louis, Edwards was relegated to backup for regular catcher Tim McCarver. He still managed to catch another no-hitter for Ray Washburn that season and made one more World Series appearance. After showing he could be an everyday catcher, the Astros made a trade for him when the '68 season was over. He played 151 games behind the plate in '69, a career high. He was a regular in Houston for four years. In 1973, he shared time with Skip Jutze and played his final season in '74.

Edwards was a solid but unspectacular hitter, but was perhaps one of the best defensive catchers of his day. The fact that he was forced aside due to Johnny Bench's arrival shouldn't detract from his skills.
Posted by Chris Stufflestreet at 8:30 AM