As a rookie, this pitcher threw three World Series games, all against Bob Gibson. He won one, lost one and earned a no-decision as the Yankees lost the 1964 Series to the Cardinals. At the time, the Yankees had been in more than half of the previous 40 years' worth of World Series. It was just a matter of time before they returned: 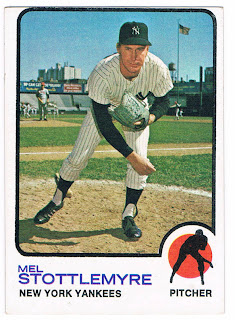 Card #519 -- Mel Stottlemyre, New York Yankees
It took them 12 years, but Mel Stottlemyre was already retired by then. He did his part to help get them back, with three 20-win seasons and five All-Star game selections, but a torn rotator cuff finished his career in 1974. He was one of the few bright spots on a sometimes dismal Yankee squad in the late 1960s.

The picture on this card shows him taking a warmup pitch in Yankee Staudium. However, he appears to be in the on-deck circle, as a bat can be seen behind his right leg. The Cleveland Indians are already on the field behind him.

After his playing career, he would go on to serve as a pitching coach. With the Mets from 1984-'93, he was there to help Dwight Gooden rattle off some great seasons on the mound and finally won his World Series ring in '86. He would return to the Yankees in 1996, where he would get four more rings that eluded him as a player.
Posted by Chris Stufflestreet at 8:30 AM