In 1972, This guy threw a one-hitter, three two-hitters, and a had ten-inning stint in which he only allowed one hit...and finished 10-21. That may explain the look he's giving on this card: 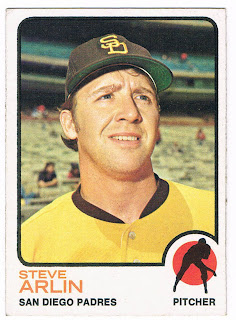 Card #294 -- Steve Arlin, San Diego Padres
In fact, Steve Arlin only won 34 games in his short major league career, but 11 of them were shutouts. Had he played for a team that could provide more run support, perhaps he'd have gotten more wins.

As of this writing, no San Diego Padres pitcher has ever thrown a ho-hitter, but Steve Arlin is the one who's come the closest. On July 18, 1972, he took a game into the ninth against Philadelphia but Denny Doyle broke up the no-hitter with two out in the ninth. He won the game, but it would be the last victory he'd get until late September.

At the time, San Diego was a young expansion team and their play wasn't exactly inspiring. In fact, in 1974, new owner Ray Kroc (the McDonalds' visionary) even went on the PA system during the team's home opener and apologized to the fans for what was on the field. Steve Arlin started that game and was chased in the second inning after falling behind 5-0 to the Astros. Arlin didn't finish '74 with the Padres; he was traded to the Indians in June and finished what would be his final major league season there.

Arlin's career started out with a lot of promise. A star for Ohio State, he struck out 20 batters in 15 innings in the 1965 College World Series. Between that year and a return trip in 1966, he set a record for the lowest ERA in the CWS with 0.96 in 47 innings. Fortunately for Arlin, he studied dentistry during his playing years and had that to fall back on when he retired.

Arlin's grandfather was Harold Arlin, who called the very first radio broadcast of a baseball game in 1921 on KDKA.
Posted by Chris Stufflestreet at 7:18 AM