Last weekend, retired executive Pat Gillick was inducted into the Hall of Fame. Since he never was a player or manager, he never had a card issued. This presents a problem when it comes to featuring him on this blog. In 1973, he was the director of scouting for the Houston Astros...but I'm not sure which prospects he had an active hand in signing. So, I'll go back to a time when he was still a player.

In 1958, Gillick was a pitcher for USC when that team won the College World Series. This player was also on that team: 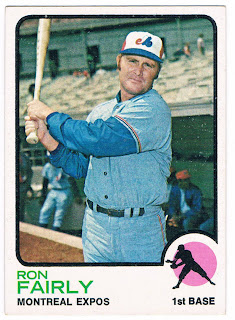 Card #125 -- Ron Fairly, Montreal Expos
By the end of 1958, Fairly was playing in the Dodgers' outfield and managed to play in the regular World Series in 1959. In all, he was able to play in four World Series with the Dodgers, winning three. However, he would be traded to the Expos during their inaugural season in 1969, in the deal that brought Maury Wills back to Los Angeles. He stayed with the Expos until 1974 and went through five teams in the following four seasons.

Along the way, he managed to hit over .300 with the Cardinals in 1975 and was an All-Star in 1977 when he represented the Blue Jays during their first season in the league.

After retiring, Fairly became a broadcaster. He currently fills that capacity for the Seattle Mariners.
Posted by Chris Stufflestreet at 8:30 AM