Hall of Fame Weekend is over, and this player is now enshrined in Cooperstown: 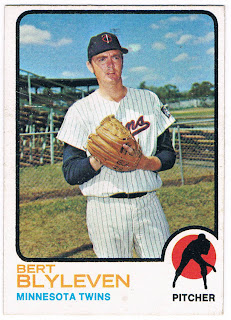 Card #199 -- Bert Blyleven, Minnesota Twins
In 1973, he was able to win 20 games for the first (and only) time in his career. He also led the league with 9 shutouts that year, and he was second in both strikeouts and ERA.

Some fans say the Hall of Fame is an honor that's long past due for Blyleven, and others have pointed out that he really wasn't a dominant pitcher during his career on the order of a Nolan Ryan, Tom Seaver or Steve Carlton. However, when he retired, he was within sight of 300 wins, struck out more than the guy who was the career leader when he was just starting his career (while that mark was broken before he reached those numbers, it's worth mentioning) and was on two World Series winners.

Some say he the SABR-centered statisticians had a hand in his election; others point out that he was hurt by being a member of some really lousy teams during his career that failed to give him better run support. Those people will probably always argue those points...so I'm not going to dwell on them.

What I will point out is that Blyleven was one of the most notorious pranksters during his playing career. His forte was the "hot foot," where he would light the laces of an unsuspecting teammate's cleats. In the clubhouse of one of his teams, there was a sign above the fire extinguisher that read: "In case of Blyleven, Pull."

After retiring, Blyleven became an announcer and has been known for his rather colorful way with the language. Not bad for a guy who was born in Holland.
Posted by Chris Stufflestreet at 8:30 AM