I can't look at this card without hearing the line from Airplane! that runs through Ted Striker's mind as he's having flashbacks from the War: 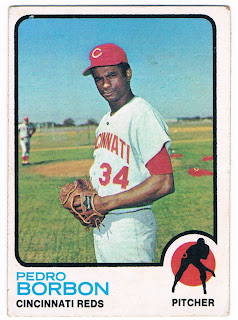 Card #492 -- Pedro Borbon, Cincinnati Reds
The only problem is that Borbon and Mota were never teammates.

As a relief pitcher, Borbon spent most of the 1970s with the Big Red Machine, appearing in three World Series and winning two of them. He compiled a very respectable 62-33 mark with the Reds, while notching 76 saves. When he was traded to San Francisco in 1979, a local legend was started that said Borbon placed a hex on the Reds that wasn't lifted until the last member of management left in 1990. Borbon has repeatedly said the story was a hoax, but it still persists.

While starting his career with the Angels in 1969, he was tarded to the Reds in a deal that brought the troubled Alex Johnson to California. He would finish his career in St. Louis in 1980.

In 1973, he was involved in a bench-clearing brawl between the Reds and the Mets. After scuffling with Met pitched Buzz Capra, Borbon picked up a cap that was lying on the ground and placed it on his head. After realizing he'd inadvertently grabbed a Mets cap, he took a bite out of it with his teeth.
Posted by Chris Stufflestreet at 8:30 AM