It's interesting that a card featuring a guy whose nickname was "Blue Moon" has a photo with such a prominent backside: 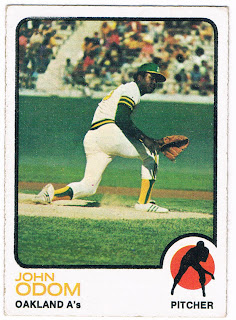 Card #315 -- John Odom, Oakland A's
Johnny Lee Odom made his major league debut at nineteen years old. It was 1964, he was facing the Yankees and no less a figure than Mickey Mantle welcomed him to "The Show" by knocking one of his first-inning pitches deep into the leftfield stands at Kansas City's Municipal Stadium. He was shuttled back and forth between the parent club and the minors through 1967.

In 1968, the A's moved to Oakland and Odom's career began to click. That year, he was one out away from a no-hitter against Baltimore. Through the midpoint of the 1969 seaon, he was nearly unstoppable. He was a key part of the A's teams that won three staright championships, but philosphical differences among the different managers caused him to be switched bewteen the rotation and the bullpen.

He would be traded to Cleveland in 1975 and then bounced to the Braves, and then the White Sox in '76. That year, he and Francisco Barrios combined on a no-hitter against the A's. It would be his final big league victory.

In addition to his pitching duties, Odom was a well-regarded hitter before the DH rule was implemented and was sometimes called in to pinch-run. Though several of his teammates were given nicknames by A's owner Charlie Finley, Odom was first called "Blue Moon" as a kid because of his round face.
Posted by Chris Stufflestreet at 8:30 AM