On September 16, 1975, this player did something nobody else has been able to in nine innings since 1900: 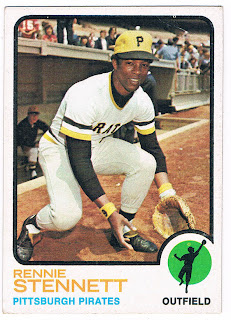 Card #348 -- Rennie Stennett -- Pittsburgh Pirates
But before I explain that, I have to mention the photo on the card. It was common with pre-1971 Topps sets to have players pose for the camera, so there are a lot of cards with obvious issues: the "hidden ball" tricks, the pitchers who seem to be throwing air, the guy who's swinging a bat in the outfield. And then there's the fielder who looks like he's going for a ground ball. In Stennett's case, not only is he smiling, but he appears to have just stepped out of the dugout.

If you're going to fake it...at least be on the field.

In 1975, Stennett penciled his name in the record books by going 7-for-7 in a game against the Cubs. As you may have guessed for a player to get that many at-bats in a single game, it was a virtual bloodbath (the poor Cubbies were on the receiving end of a 22-0 thrashing). Stennett wasn't the first of go 7-for-7 (Cesar  Gutierrez did it in 1970), but Stennett was the first modern era player to reach that mark within a standard 9-inning game. The "modern era" caveat hides the fact that Wilbert Robinson also went 7-for-7 in a nine-inning contest in 1892...but for whatever reason, 1800s records outside of victories get short shrift in these discussions.

Interestingly, Stennett didn't even finish his 7-for-7 game, as Willie Randolph was sent in to pinch-run for him after his seventh hit.

Despite that one showing of offensive agility, Rennie Stennett was better known for his glove and his baserunning skills. He came up with the Pirates in 1971 but wasn't on the postseason roster when they won the World Series that year. He was part of divison champs in 1972, 1974 and '75 and finally got a Series ring in 1979. However, his starting job at second base was lost that year when the Pirates picked up Bill Madlock. He went to the Giants via free agency in 1980 and finished his career there after a two-year stint.
Posted by Chris Stufflestreet at 8:30 AM