I don't know what stands out in this picture more...the "hot mustard"-colored uniforms the Padres wore or the empty stadium in the background: 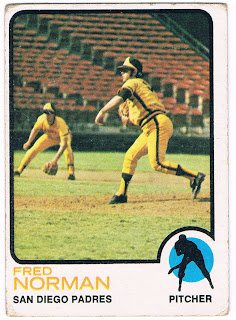 Card #32 -- Fred Norman, San Diego Padres
In 1973, Fred Norman started out with a 1-7 record, so the Padres traded him to Cincinnati on June 12. Finally able to help out a team that could give him some run support, he responded by going 12-6 for the Reds the rest of the season. Despite an overall 13-13 record, he still finished in 6th place among Cy Young votes for such a strong second half.

Despite getting into his first major league game with the Kansas City A's at the age of 19, he never made the big leagues to stay until he was 27. In between, there were several short stints in the majors for him with the A's, the Cubs and the Dodgers. He finally caught on with the Cardinals in 1971, but then was traded to San Diego and turned into a starting pitcher. From 1971 through '73, he suffered trough a 13-30 record. So, when the call arrived that said he'd been traded to the Reds, he may have been happy to get it.

His record in Cincinnati was consistent, and he was a part of two straight World Championship teams in 1975-'76. He was always able to get over 10 wins every year and his ERA was always in the 3.30-3.70 range. He also managed to keep a winning record during his years with the club, save for an 11-13 mark in 1979. After that season, he signed as a free agent with Montreal and finished his career as an Expo in 1980.

Despite his terrible career numbers through the first half of 1973, Fred Norman retired with a lifetime mark of 104-103 thanks to his six and a half years with the Reds.
Posted by Chris Stufflestreet at 8:30 AM