Last weekend, Roberto Alomar was inducted into the Hall of Fame. Since he was still a kid in 1973, he wouldn't have a baseball card yet. However, his father was an active player: 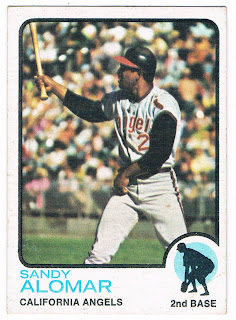 Card #123 -- Sandy Alomar, California Angels
Sandy Alomar was adept all over the field. He was capable of playing any infield or outfield position. He was also a fleet-footed baserunner who was an aggressive base stealer. Ironically, his main weakness was the one he shows here, his bat. His career average was .245.

Alomar is better known as the father of two future major leaguers. Sandy Alomar, Jr. was a catcher, and Roberto is now in the Hall of Fame. Both came up to the majors in 1988 for the San Diego Padres, where Sandy Sr. was a coach. He's still coaching with the Mets today.
Posted by Chris Stufflestreet at 8:30 AM