As was the habit for the team at the time, there were some players here who would be remembered for their prowess on other teams, but together they were something of a motley crew: 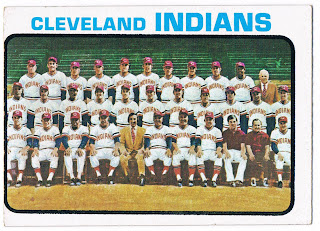 Card #629 -- Cleveland Indians Team
Their ace pitcher was a workhorse in 1972. Gaylord Perry won 24 games en route to a Cy Young award, but the rest of the staff found it hard to keep a winning record. And so it continued in 1973, except that Perry wasn't able to get more than a .500 record either. They finished in sixth place in the A.L. East that year.

That had to be a thorn in the side to all those Tribe fans who remembered the glory days when their staff included Bob Feller, Bob Lemon, Early Wynn and Mike Garcia.
Posted by Chris Stufflestreet at 8:30 AM