I grew up a little later, so this picture of Jose Cruz seems a little odd: 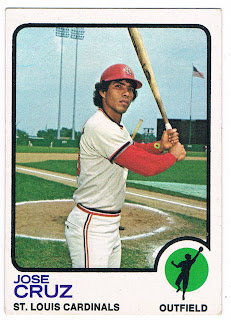 Card #292 -- Jose Cruz, St. Louis Cardinals
I remember him as a member of the Houston Astros, where he would play from 1975-'87. Even when he played for the Yankees (my favorite team) in 1988, he looked odd even in pinstripes.

Baseball was a family affair for Cruz. His brothers Hector and Tommy both made their major league debuts in 1973, and his son Jose Jr. was a major leager between 1997 and 2008. Originally signed by St. Louis, he made the parent club late in the 1970 season and was one of the team's outfielders through 1974. Houston bought his contract for 1975.

He blossomed into a local star while playing in the Astrodome. Unfortunately, since that wasn't exactly a hitter-friendly park, he wasn't able to grab the attention he may have gotten in other cities. Offensively, he only led the league one time (with 189 hits in 1980) However, he didn't let that bother him, as he was a key member of the Astro teams that won division titles in 1980, 1981's first half and 1986. Along the way, he was able to set a number of all-time team records.

After 1987, Cruz tested the free agent waters despite being 40 years old. And of course, the Yankees -- in a period of questionable free agent activity -- picked him up, hoping he could work out as an occasional DH. He lasted halfway through the season, even hitting a pinch grand slam in his second to last game.

After finishing up his playing days, he became a first-base coach for the Astros, where he was on hand to watch Craig Biggio break several of his own all-time club records.
Posted by Chris Stufflestreet at 8:30 AM