Hard Road to the Majors

Would you believe this guy was unable to make the cut for his high school varsity baseball team? 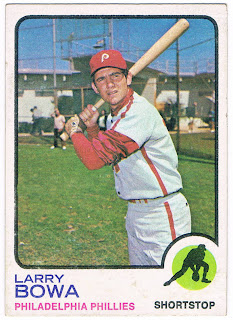 Card #119 -- Larry Bowa, Philadelphia Phillies
Undaunted, Larry Bowa became a fixture at shortstop for the Phillies during the 1970s. After high school, he was a star at Sacramento City College but wasn't expected to make the draft. In fact, when the Phillies sent a scout to watch him play, he was tossed out of the game for arguing with the ump. In the end, he had to prove himself on a Winter league team before the Phillies decided to give him a shot.

When he arrived in Philadelphia in 1970, he was quickly named as the regular shortstop. The team was fairly awful at the time, but the management began building a solid team around him: pitcher Steve Carlton was acquired in 1971, Mike Schmidt took over third shortly after that and the pieces slowly fell into place. Between 1976 and '81, the Phillies made the postseason five years out of six and won the 1980 World Series. Bowa's reputation as a firebrand helped him to become a fan favorite at Veteran's Stadium, even if the team's management didn't always concur.

In 1981, the Philadelphia front office had grown tired of Bowa's antics and looked to trade him away. The Cubs had recently hired his former manager Dallas Green as their GM and offered to make a deal for him...but on one condition. Green knew Bowa wouldn't be a long-term solution and demanded that minor league shortstop Ryne Sandberg be part of any deal. Needless to say, the trade was quite a benefit the Chicago for years to come. Bowa was a key member of the 1984 Cubs, but lost his starting job to Shawon Dunston the next year. He would finish 1985 (and his career) with the New York Mets.

After retiring, Bowa was a manger (for both the Padres and Phillies) and a coach for several teams. He also used his unique perspective on the game to become a radio analyst.
Posted by Chris Stufflestreet at 8:30 AM