At the time this card was issued, this man had recently hurled a no-hitter: 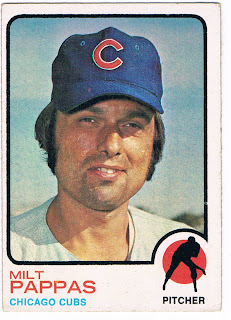 Actually, the game on September 2, 1972 against the San Diego Padres had been a perfect game with two outs in the ninth inning, before umpire Bruce Froemming called two close pitches as balls to let Larry Stahl go to first. Pappas retired the next batter, but has always claimed that Froemming took away his perfect game.

Pappas originally came up with the Baltimore Orioles in 1957. In 1961, he tossed a fastball that would become Roger Maris's 59th home run. When the Orioles traded him to the Reds after the '65 season, they picked up Frank Robinson, which was eventually seen as a lopsided trade in favor of Baltimore. However, Pappas was still a good pitcher...it's just that Robinson's next season was a monster. He eventually went to Atlanta in 1968 and the Cubs in 1970. 1973 would be Pappas's final season.

Debuting at the age of 18, Milt Pappas was one of 16 pitchers in the liveball era to win 150 games before his 30th birthday. Of that list, only Greg Maddux has ever managed to get 300. He also hit 20 home runs during his career.

As for his nickname "Gimpy"...Pappas had knee surgery at 17, and was called that during his recuperation. Despite not being injury-prone during his major league career, the nickname manged to follow him.
Posted by Chris Stufflestreet at 8:30 AM