As you can see by the umpire's call, Dave Concepcion just had a strike called against him: 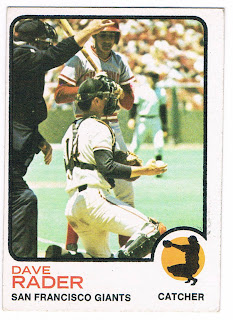 Card #121 -- Dave Rader, San Francisco Giants
Dave Rader had become the Giants' starting catcher in 1972 as a rookie. For his effort, he was the runner-up for the Rookie of the Year award. Unfortunately for him, the winner of the A.L.'s Rookie of the Year Award was also a catcher, so the Topps All-Star Rookie trophy was placed on Carlton Fisk's card instead.

Interestingly, Rader finished his major league career as Fisk's backup in with the Red Sox in 1980.

Rader was a very good defensive player, which helped the Giants overlook his weaker offensive statistics. He would remain with the Giants through 1976, before being traded to the Cardinals to back up Ted Simmons for 1977. The Cubs picked him up for 1978, which allowed Rader to once again become a starter. The next year, he was traded to Philadelphia where he was a third-stringer to Bob Boone and Tim McCarver. That led to his Boston gig.

After being signed with the Angels for 1981, he was released during Spring Training and hung up the mask for good.
Posted by Chris Stufflestreet at 8:30 AM