Though overshadowed during his career by another player named Reggie, Reggie Smith was no slouch on the diamond: 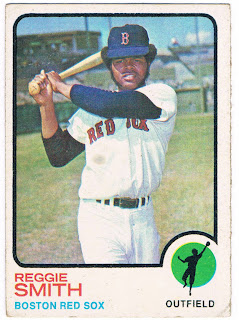 Card #40 -- Reggie Smith, Boston Red Sox
I love the way Smith's afro is beginning to sprout under his hat in this photo.

Reggie Smith was part of two great teams. First, he was part of the "Impossible Dream" Red Sox in 1967. A decade later, he was the centerfielder and a key weapon in the Dodgers' arsenal during the late 1970s. Since I began paying attention to baseball in the late 1970s, I remember him more as a member of the Dodgers between three World Series against the Yankees and as a part my budding collection of baseball cards. Therefore, seeing him in another unifrom seems odd, even though he spent more time with the Red Sox than he did in Los Angeles.

Smith was a gifted batter, who could hit for both average and power. He also possessed excellent range in the outfield. While not exactly Hall of Fame material, Reggie Smith's career numbers have definitely been overlooked. 1973 would be his final season at Fenway, and he was traded to the Cardinals after the season. After posting two straight .300 seasons in St. Louis, he was traded to the Dodgers for Joe Ferguson (which, in hindsight, was a really lopsided deal). He helped the team to back-to-back Series in 1977-'78.

In 1980, Smith suffered a couple of injuries that limited his playing time. First, he and Derrel Thomas had a locker room argument, so Smith took his frustration out on a water cooler. The cooler won, and sixty stitches were needed in his wrist. Then, he injured his shoulder making a throw. That ended his season and limited him in 1981, but he was still able to play in the World Series (a winning effort) that year.

In 1982, Smith tested free agency and entered into talks with the Yuriomi Giants in Japan. However, they wouldn't get into financial specifics, so he stayed in the U.S. and played for a different Giants team. That would be his final season in the majors, and he ended up going to Japan for 1983. Despite a bad experience there that saw him frequently ridiculed for his mannerisms, Smith still paid attention to the coaching he recieved at the hands of Sadaharu Oh and used them in his own coaching career later on.
Posted by Chris Stufflestreet at 8:30 AM