This guy holds the all-time career record for home runs from a player born in Utah: 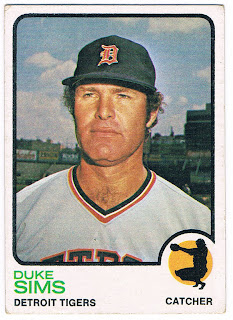 Card #304 -- Duke Sims, Detroit Tigers
Duke Sims also hit the last ever home run in "old" Yankee Stadium, before its mid-70s renovation. That was at the tail end of the '73 season, when he was a member of the Bronx Bombers and playing against the team shown on his '73 Topps card.

Sims was signed by the Indians in 1959 and first came up to the club in 1964. He was up and down a few times, but had become the team's regular catcher by 1968. He was also the regular catcher for "Sudden" Sam McDowell during that period and was valued for his defensive capabilities. That said, he was no slouch with the bat, getting a .340 on-base percentage despite his lifetime .239 batting average.

After 1970 he was traded to the Dodgers for two players (Alan Foster and Ray Lamb), but was waived in 1972. Despite joining the Tigers in August of '72, he managed to be featured in the correct uniform for his card in 1973 (although he was shown as a Dodger behind the plate on Glenn Beckert's photo that year). Late in '73, he was traded to the Yankees and then finished with the Rangers in 1974.

After his retirement, Sims spent one year as a manager in the White Sox' farm system.
Posted by Chris Stufflestreet at 9:00 AM