While his nickname "Skeeter" was probably derived from his Tennessee birthplace, this pitcher had a crazy nickname during the three years he played in Japan: 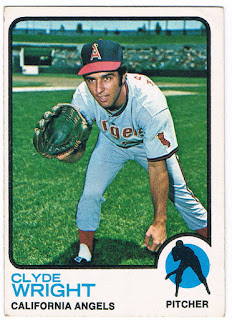 Card #373 -- Clyde Wright, California Angels
During his first season in Japan, Clyde Wright was about to get yanked during the first inning with two on and nobody out. As the manager walked to the mound, Wright stubbornly refused to give up the ball and then threw it hard into his team's dugout. The tactic was seen as disrespectful by the Japanese fans and critics, who called him "Crazy Righto" after the incident. Which is really funny, considering the photo above clearly shows he's a left-handed pitcher.

Before his career in Japan, however, Wright spent a decade in the majors. He came up with the Angels in 1966 and pitched a complete-game four-hitter against the Twins during his first game. By 1970, he taught himself the screwball and enjoyed his best season, going 22-6 and throwing a no-hitter. 1973 would be his final season with the Halos; he spent 1974 with the Brewers and '75 in Texas. His three-year career in the Far East began in 1976, as he was only the second white American-born player (Davey Johnson was the first) to play for the Yomiuri Giants in over a decade.

In 1977, Wright -- along with fellow expatriate players Roger Repoz and Charlie Manuel -- decided to take on several East German hockey players in a fight while visiting a club. That didn't end well for them. After retiring, Wright opened up about his battle with alcohol and has participated in community outreach on that topic. His son, Jaret Wright, was a pitcher from 1997-2007.
Posted by Chris Stufflestreet at 8:30 AM