Not the Guy From "F Troop"

While another person with the same name was gracing the "boob tube" as the captain of a misfit cavalry unit, this guy was playing in the White Sox' outfield: 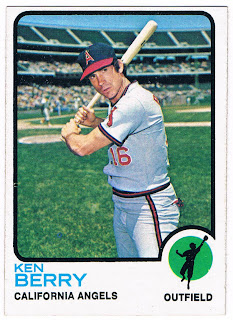 Card #445 -- Ken Berry, California Angels
This Ken Berry did go on to an acting role as well, playing a fan in the 1988 film Eight Men Out, after he served as a consultant for the producers of that movie.

As a member of the White Sox from 1962-'70, Berry was a well-regarded defensive outfielder, earning a place on the American League's All-Star team in 1967. He was mainly a centerfielder, but moved over when Tommie Agee played for the team. He won a Gold Glove award for them in 1970, his last season there. Traded to the Angels after that season, he continued as a regular player in the outfield and earned a second Gold Glove in 1972. 1973 would be his last year as an everyday player, as well as his last in California. He would be traded to Milwaukee for the '74 season and spent the first half of '75 in Cleveland.

Berry worked as a coach and a minor league manager in several organizations since his retirement.
Posted by Chris Stufflestreet at 8:30 AM