This guy earned the nickname "Silent George" from his habit of not talking with reporters: 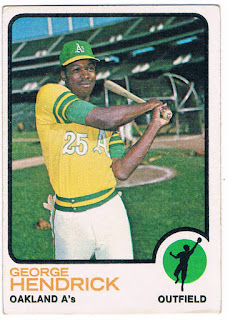 Card #13 -- George Hendrick, Oakland A's
He isn't nearly as quiet today, in his position as the first base coach for the Tampa Bay Rays. But as a player, he just kept his mouth shut while the media was around. He was also the first player to wear his pants down around his ankles, helping to usher in a uniform style often derided by the "old schoolers" who prefer the stirrup socks worn several years ago.

Hendrick had other nicknames as well: he was also called "Jogging George" and "Captain Easy" due to what his critics claimed was a lack of running out plays. However, he was a major leaguer for almost two decades and a key member of several teams. As you see in the card above, he was a member of the Oakland A's during their 1970s dynasty, but was traded to Cleveland in the Ray Fosse deal just before the '73 season began. He remained with the Tribe through '76 and then spent two seasons in San Diego. In 1979, he began a stint in St. Louis that is probably where most fans remember him. He was an important cog in that team's outfield in 1982 as the Cardinals won the World Series. When they returned in '85, they may have been able to use him; however, Hendrick went to the Pirates and then to California that year and finished his career with the Angels in 1988.

Hendrick began his coaching career during the 1990s. Since Joe Maddon does most of the talking for the Rays' staff, I still don't know if he's softened up on his icy relationship with the writers.
Posted by Chris Stufflestreet at 8:30 AM