Let's feature another of the multi-player rookie cards in the final series of the 1973 Topps set. Here are three up-and-coming pitchers, presented in alphabetical order: 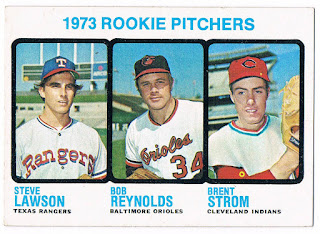 Card #612 -- Rookie Pitchers
For Steve Lawson, this would be his only card. In fact, when this card was issued, his major league career was already finished. He was drafted by the A's in 1969 but stayed in the minors until he was dealt to Texas as the "player to be named later" in the Ted Kubiak trade midway through the 1972 season. He stayed with the parent club for the rest of that season, getting into 13 games as a reliever. That was a change for Lawson, who was a starter as he made his way through the bush leagues. He went back down in 1973, spending two more years before giving it up.

With Bob Reynolds, this wasn't really a rookie card. This card marked his third appearance with as many teams. In 1971, he was on a card featuring three pitchers, all of whom had the same last name. In 1972, he was the only player correctly identified on a card featuring three Brewers. He pitched for six different major league teams from 1969 through 1975, with the Orioles being the only one that saw him stay longer than one season. He also pitched for Baltimore in the 1973 and '74 ALCS. He went to Mexico to pitch in 1976 and spent '77 in Japan.

Brent Strom is also a true rookie here. His first card is airbrushed to reflect his trade from the Mets to the Indians after the '72 season. Prior to his major league career, he played ball at USC, where he was part of two College World Series championship teams. 1973 would be his only season with the Tribe. After not pitching anywhere in 1974, he resurfaced in '75 with the Padres and remained there through 1977. An elbow injury limited his effectiveness, but he remained in the minors until 1981. Strom has been a well-taveled coach and instructor since his retirement.

Interestingly, none of these pitchers had a winning career record in the majors.
Posted by Chris Stufflestreet at 8:30 AM