I just realized that there hasn't been a Hall of Famer featured on this blog since last August. Yikes! Let's remedy that little issue today with this legend: 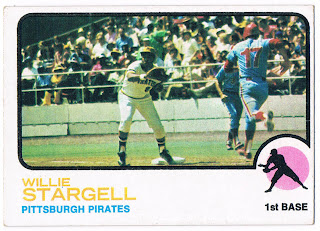 Yesterday would have been Stargell's birthday if he was still with us. He was a beloved figure in Pittsburgh (where he played his entire career) as well as elsewhere, thanks to his skill, his affable manner and his memorable quotations. When asked what it was like to hit against Sandy Koufax, he said, it was like "trying to drink coffee with a fork." That's not to say that he was afraid to take his place in the batter's box; he crushed the first home run out of Shea Stadium in 1964, hit the longest homer out of Three Rivers Stadium as well as the longest out of Montreal's Olympic Stadium (and also Veterans Stadium in Philly) and hit the first homer to travel completely out of Dodger Stadium. He enjoyed that distinction so much, he did it a second time as well in 1973.

Also in '73, he led the National League in both homers and doubles, hitting more than 40 of each. That was a rare occurrence, especially in an era where the offensive numbers were lower than normal. In all, he belted 475 home runs even though he retired with what was then the all-time record for strikeouts by a batter. Even during the twilight years of his career, he was still showing up to play. In 1979, he was the leader of a Pirates team that followed its destiny to win the World Series. The team chose the Sister Sledge hit "We Are Family" as their song, and he was called "Pops" to show exactly where he hit into that family. That year, he was the MVP of both the NLCS and the World Series, as well as a co-MVP of the National League...at 39 years old.

Beginning in the late 1970s, Stargell handed out embroidered stars to his teammates for excellent plays, and they were placed on the old-style pillbox hats the team used then. Those stars would remain a part of the Pirates' look until he retired in 1982. He would be elected to the Hall of Fame in 1988, the first time he was eligible for induction.

Sadly, a stroke sidelined Stargell for good in 2001.
Posted by Chris Stufflestreet at 8:30 AM