This player was the son of another baseball player, who might be mistaken for a legendary racecar driver: 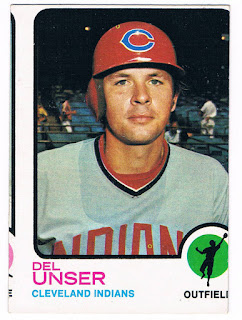 Card #247 -- Del Unser, Cleveland Indians
Del Unser was the son of Al Unser, who isn't related to any of the three racecar drivers in a family dynasty. Instead, he was a catcher for the Tigers and Reds during the World War II era and later seved as a coach and scout. As for Del Unser, he was a pretty good player in his own right, spending 15 seasons with five different teams.

Coming up with the Senators in 1968, he remained with the team until they were finished in Washington. But rather than move with them to Texas, he was traded to Cleveland for the '72 season. By the time 1973 rolled around, Unser was actually a Phillie despite what his card said. Apparently, the move was made too late in the process for Topps to give the assignment to its airbrush artists. After that, he moved every 2-3 years, joining the Mets and Expos before returning to the Phillies, where he was part of the 1980 World Series Champions.

Now for the thing I really wanted to say...

Unser's card above exhibits what collectors refer to as a miscut. With miscut cards, it goes beyond simply being off-center: part of an entirely different card shows up as well. When caught in the factory, miscuts were pulled from production and thrown away. This one, however, made it into the pack. While collectors tend to discount them and severely discount their value, some hobbyists see the older miscuts as "clues" that help them determine where a card was on a printing sheet in order to determine why certain cards are harder to find in top condition than others. In that case, they tell a story and are pretty noteworthy.
Posted by Chris Stufflestreet at 8:30 AM