With this post, there have been 300 cards featured in this blog. While not yet halfway through the set, it is still a milestone. And this milestone post shows a player who had just completed a phenomenal season in 1972: 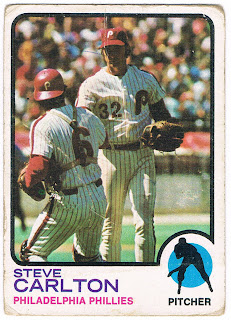 Card #300 -- Steve Carlton, Philadelphia Phillies
The picture shows Steve Carlton being congratulated after one of his 27 wins that season. However, the catcher's helmet obscures his head. Number six belonged to both John Bateman and Tim McCarver that season (the two catchers were traded for each other during the season), so it could be either of them.

What makes Carlton's 27 wins that season truly impressive is that the Phillies only managed 59 wins all season. That accounted for 46 percent of the entire team's wins, still a record for all pitchers since 1901. He also led the league with 30 complete games, 310 strikeouts and a 1.97 ERA. He also won the first of his four Cy Young Awards and the Hickok belt, awarded to the top athlete among several sports between 1950 and '76.

1972 had also been the first year that "Lefty" spent in Philadelphia. He came up to the St. Louis Cardinals in 1965 and was a member of the World Series-winning 1967 club. However, he was known to be difficult at contract time because he knew he was worth more than the team wanted to pay him. Carlton was a no-show in 1970 during contract talks, but rebounded the next year to win 20 games. When he grumbled over his salary for 1972, he was traded to the Phillies in exchange for Rick Wise. At the time, it was seen as an even trade, but is now seen as a very lopsided deal after the records began racking up.

Carlton stayed in Philadelphia through 1986, helping that team to five division titles and two World Series. He was the ace of the team, steamrolling his way to more than 300 career victories and (temporarily) breaking the all-time career strikeout record. By 1984, Carlton began showing his age but was still a mound presence. After being traded to the Giants in '86, he bounced from them to the White Sox, Indians and the Twins fairly quickly before retiring after 1988. There was little debate about his Hall worthiness, and he was a first-ballot inductee into Cooperstown.
Posted by Chris Stufflestreet at 8:30 AM