When I was a young collector, this pitcher was a "LOOGY" (a left-handed, "one-out" guy) who was being ridiculed by David Letterman about his weight: 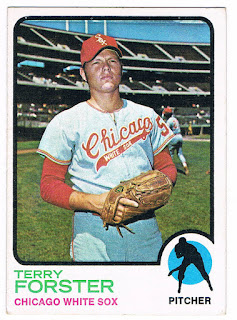 Card #129 -- Terry Forster, Chicago White Sox
In this picture, Terry Forster is shown fairly early in his career (he came up with the White Sox in '71 and turned 22 just as the '73 season was beginning), but he -- like many of us -- underwent "the battle of the bulge" as he approched middle age. As a person who showed up on TV...in the early days of cable when WTBS wasn't yet known as "The Superstation"...playing for what called itself "America's Team," it was pretty noticeable. In fact, Letterman would refer to him on several occasions in his late-night monologue as a "tub of goo."

When he came up with the White Sox in the early 1970s, he was a fire-throwing phenom who was perfectly suited as a closer. The problem was, he came up at the same time as Rich Gossage, who was also a superb reliever. As a result, the two pitchers' save totals would jump around from year to year until 1976. In that season, skipper Paul Richards came up with the idea that both Forster and Gossage should be moved to teh starting rotation. It ended up being disatrous and both pitchers would be shipped to Pittsburgh the following year.

Forster went to the Dodgers in 1978 as a free agent. During his five seasons in Los Angeles, he went to the World Series twice and faced against Gossage both times. He was on the winning team in 1981. He went back on the free agent market after the '82 season and landed in Atlanta, where he caught the eye of Letterman's writing staff. He remained there until 1985 and spent one last season with teh Angels in '86 before retiring.

He seemed to take the attention about his weight in stride. He appeared as a guest on Letterman's show, and later recorded a novelty song called "Fat is In." Take that, Richard Simmons!

Forster was also a very good hitter. He collected 31 hits in his career and finished with a .397 average for his career. Not only was he used as a pinch-hitter several times in his career, he only struck out nine times.
Posted by Chris Stufflestreet at 8:30 AM