There really isn't a lot of information about this guy on the regular reference sites devoted to baseball players: 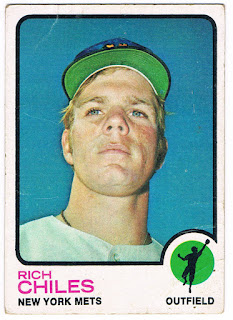 Card #617 -- Rich Chiles, New York Mets
He's airbrushed into his Mets uniform due to the fact that he had been with the Astros from 1971-'72. His tenure with the Mets was short; he was with the team for the first couple of weeks of 1973 and spent the rest of the season in Tuscon as a minor leaguer. His next time in the majors would come in a mid-season callup to the Astros in 1976, followed by a stint in Minnesota from 1977-'78.

What is interesting is that he has no stats at all listed for 1974 and '75. Baseball-Reference says he was signed by the Padres for '74 but doesn't appear to have played anywhere. He seems to have taken the entire 1975 season off. He doesn't appear to have played in Japan, or served in the military, or joined a monastery, or went off on an extended bender or anything.

After his retirement, Chiles went back to run his family farm near Davis, California. He was a cousin of Hall of Fame player George "Highpockets" Kelly.
Posted by Chris Stufflestreet at 8:30 AM