Behind the very 1970s-styled sideburns, there's not a lot of information about this guy on the regular Internet databases: 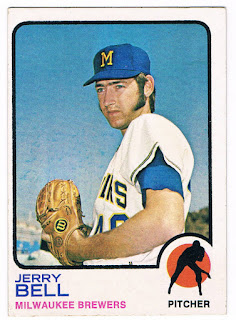 Card #92 -- Jerry Bell, Milwaukee Brewers
Jerry Bell played his entire major league career with the Milwaukee Brewers. He was drafted by the Seattle Pilots during their only season in 1969, and then stayed with the organization after they relocated to Milwaukee. Primarily used as a reliever at first, he was moved to the regular starting rotation in 1973.

He was known for having decent control and was excellent at placing his pitches. However, he was out of the game after 1974.
Posted by Chris Stufflestreet at 8:30 AM