His moustache makes its first appearance on a baseball card here. It hasn't yet sprouted into its full handlebar glory yet, but that was right around the corner: 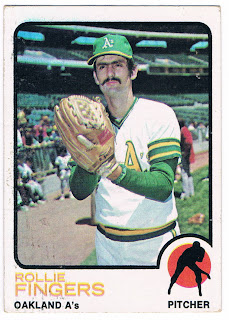 Card #84 -- Rollie Fingers, Oakland A's
During Spring Training in 1972, Reggie Jackson showed up to camp sporting a beard. As a result, several of his teammates grew their own facial hair as a way of getting him to cut it or else have management step in when enough was enough. However, owner Charlie Finley saw it as a way of promoting the team and went crazy with it. He held a "Moustache Day" where fans could get in free if they had one, and offered his players an incentive for the best facial hair. Catfish Hunter and Ken Holtzman sported great facial hair...but Rollie Fingers waxed his into an 1800s-styled handlebar, winning the prize and beginning a look he maintains to this day.

Fingers was well-known for that handlebar, but his place in baseball history shows him as one of the forefathers of the specialized relief pitcher role that has become so important to clubs over the last 50 years. The ironic thing is that he was sent to the bullpen early in his career as a member of the A's because he was uneven in the rotation. At the time, the starter was expected to carry the team through nine innings and a reliever was ready in case things got out of hand (with occasional exceptions, like Hoyt Wilhelm and Roy Face). Fingers excelled quickly in his new role, and manager Dick Williams saw the potential of having a strong "closer" on hand to keep things close in the late innings as the arms began to get tired.

There was still the occasional starting assignment, but Fingers was the A's main closer by 1971. He stayed in that role through the team's "dynasty" period, where they won their division each year from 1971-'75. He joined the San Diego Padres as a free agent after the '76 season and was named the Relief Man of the Year in three of his four seasons there. After the 1980 season he was traded twice, ending up with the Brewers in 1981. That season, he won the A.L. Cy Young Award as well as the MVP award. After sitting out the 1983 season, he returned to the Brewers for two more years to finish his career. In just over a decade, Fingers went from being assigned to the bullpen as a demotion to defining the way a relief pitcher should be used.

He was offered a contract to play for the Reds in 1986, but was told that he would have to shave his moustache off in accordance with the rules established by team owner Marge Schott. His response was classic: "Well, you tell Marge Schott to shave her St. Bernard, and I'll shave my moustache." He was a second-ballot Hall of Fame inductee, getting his plaque in 1992. He was only the second enshrinee who was a relief pitcher, after Wilhelm.
Posted by Chris Stufflestreet at 8:30 AM