The Fickle Finger of Fate... 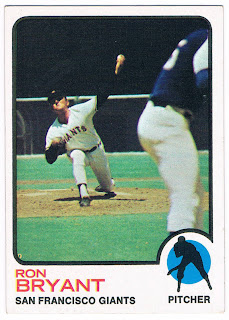 Card #298 -- Ron Bryant, San Francisco Giants
This, by the way, is a great picture of Ron Bryant getting ready to deliver at Candlestick against  a member of the Braves. The number 5 that is showing on his jersey indicates that the player is either Paul Casanova, Rico Carty, Oscar Brown or Phil Niekro.

The 24 wins he racked up tied him with Wilbur Wood for the most in the major leagues that year. Bryant first came up to the Giants in 1967 and became a semi-regular in the rotation by 1970. In 1972, he began showing signs that he could be really dominant, pointing to his monster year in '73.

And then it was over. Bryant was injured in a swimming pool accident during Spring Training in 1974, and was never the same pitcher after that. His record fell to 3-15 that year, and the Giants traded him to St. Louis before the '75 season. A 16.62 ERA in a little more than eight innings led to his quick release. Bryant tried to come back in 1976 with the Dodgers, signing but never making it out of AAA.

Just two years after tying for the majors' win total, Ron Bryant was gone. That was an immense burnout.
Posted by Chris Stufflestreet at 8:30 AM