Reflections On a Name

Here's a guy whose cards I used to take some interest in, as he was one of the few players who shared a first name with me: 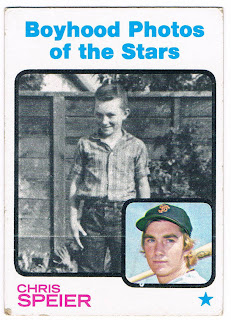 Card #345 -- Chris Speier (Boyhood Photo)
Like many young boys born during the 1970s, I was given the name Christopher. It's Greek in origin, and its roots are fairly obvious...it's related to the Big Guy on the Cross whose death (some call it "martyrdom") started an entire religion. While this blog isn't religious in any sense, I'll stop there...but in a historical sense, the name "Christopher" goes back nearly two thousand years but didn't seem to become popular for naming people's sons until the early 1970s. I think the fact that that era coincided with Jesus Christ Superstar and what I call "God Rock" (Norman Greenbaum's "Spirit in the Sky," Ocean's "Put Your Hand in the Hand," et. al.) probably helped that. Yes, there were exceptions -- like the player above, and also the guy I was named after -- but most of the Christophers you're likely to meet are likely around 30-40 years old.

None of this has anything to do with baseball. But that's okay, since the picture on this card doesn't, either.
Posted by Chris Stufflestreet at 8:30 AM